This is not gore and this is not fake, this is real and this is art. This isn’t horror, yet it horrifies, this is not narrative filmmaking, yet it’s emotional and heartbreaking. How is it possible that a short documentary manages to be a masterpiece? A documentary made by an american experimental filmmaker that was frightened of the experience of death, and so after seeing just one dead body in his entire life, he puts himself forward with a brave intention, to show what no one else has ever shown before, an act of bravery, something that most surely will never ever be repeated on the screen in any form. This is…

The title of this short documentary reveals the true meaning of the word ‘autopsy’, and it is time to wonder why in the world would ‘Seeing with One’s Own Eyes’ would mean cutting up bodies after they are dead. It is fitting and always impressive when metaphors of seeing, eyes and visuals are used for a film where the act of seeing itself is being challenged, like in this one. It’s almost like a dare, a game, try to look deeply into the strong and raw images that Brakhage puts forward for us and not shy away at least one time because of the nature of the acts depicted. 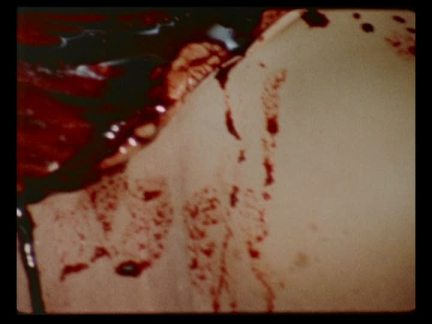 The anonimity of the bodies presented and framed in the tight zoomed-in grainy takes that the 16mm camera of Stan Brakhage uses with color film is one that is understandable and at the same time frightening, the fact that some of the original first viewers of the film may have been watching the bodies of their friends, known people, familiars, yet because the most important, defining and cinematic part of the human body, the face, is absent, it makes up for a most interesting experimentation on the fact of seeing people and not actually seeing them because their eyes are hidden and at the same time, they can’t see. The only people we get to know are the doctors that take care of the routine of cutting and opening the bodies of the dead, and yet that identification is put to a hold because of one of the most interesting aspects of the films of Stan Brakhage: no soundtrack, no sound, no narration, silent score.

And I think that it is in this specific short that the necesity and the use of a silent score works completely and in favour of the film, while in something like the Star Dog series failed to achieve its poetic and atmospheric completion without a score (I know it’s probably a sacrilege what I’m saying, but it’s what I felt watching it, specially the latter segments). You feel the dread and the abject beauty/disgust of the human body, something you are living in and that you have to make yourself comfortable with. Death is something that has to be lived with, something that is there, ever-present, and maybe if you didn’t know that it was there, and how horrifying/beautiful it can be, well, this short can surely help put things into perspective. That is the reason why it’s a masterpiece and maybe the best thing that Stan Brakhage has ever done.

You can watch this masterpiece in its entirety on youtube: